It was what I asked Rich after running into him atop the double. He didn’t say anything, just smiled and headed towards Freefall. 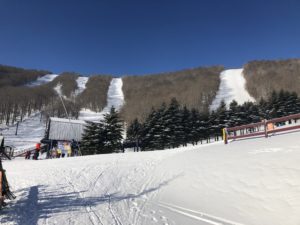 This was Saturday. A definition bluebird sky, not a cloud in sight. Cold. And nearly every trail groomed to pristine perfection. 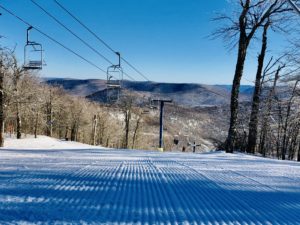 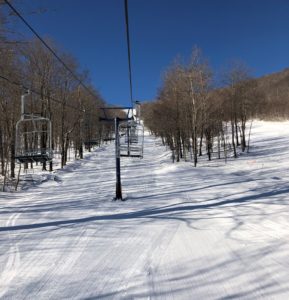 I followed Rich to the top of Freefall where he – without hesitation – launched a 90 degree shifty off the top headwall, landing…I don’t know…somewhere FAR below my sightline. By the time I dropped in he was nearly halfway down, laying down his typical high-speed carves –packed powder spraying skyward. 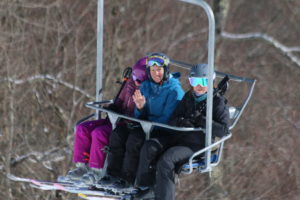 I’ve never seen Freefall groomed from top to bottom. And the consensus was that most people hadn’t. It’s a favorite of many, myself included – all natural snow, with its perfect pitch and width. Depending on the side you choose, the snow can give you anything from soft chop, moguls, ice…everything. Today it was and completely covered with natural snow, groomed top to bottom, packed powder.

And did I mention bluebird skies? 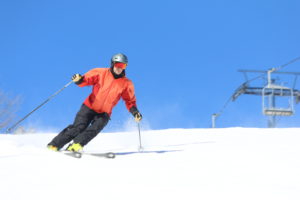 I tied catch Prado, but for most of us it’s a losing bet. The best we can do is admire – inspired to push ourselves, appreciate what is possible…

Next up: Chris Stearns (if I don’t ski at least once with Chris, I feel as though something is missing). He joined me on the double – grinning ear to hear. He’d obviously just ripped the same run.

“I’ve never skied it so fast! You have to really stay balanced…”

At this point, Chris told me something that I absolutely loved. Anyone who knows him will absolutely appreciate this. (Paraphrasing a little, and apologies for anything misremembered.)

“You have to be fluid water,” he said. “Unlike when standing in a river, where you are the solid, the water flows around you… when you are on the snow, that water is solid…you are fluid. Stay fluid…supple… you’ll find your balance.”

I pondered this as we made our way back to Freefall, and as I witnessed him rocket past… arms wide… perfectly arched turns. Fluid.

I’ve been lucky enough to ski with John quite a few times this season so far. And each time, he’s an absolute pleasure to watch. Technically pristine carves, stable at speed, playful and smooth off-piste, his skiing reminds me of a high-end SUV… ripping through everything just more speed and agility than most.

Except – today he’d borrowed a pair of Atomic racing skis. Today he was Formula 1.

I’d dropped in a bit before him, and was quickly up to speed… probably the top speed for the skis I was riding… the tips were starting to chatter, but I was remained in control and felt strong through the turns. It was maybe my fastest run of the day, and I focused on fully engaging the length of the skis… working to keep forward – balanced – fluid – on the pitch. Thinking…”Holy…”

And something blurred past.

John flew by as though I wasn’t even moving. I’d been skiing Freefall with people all day and no one even came close to matching him. I don’t think he was even on the ground between turns… I had to stop a moment and just watch him… laughing… giddy at the absolute madness of his speed.

By the time I caught him at the chair, neither he nor I could barely speak… all I could manage was to repeat and finish my earlier “Holy…”

And Jen, freshly back from altitude training in Jackson… was more than happy, lap after lap, to partake in the goods. She kept me skiing bell to bell. 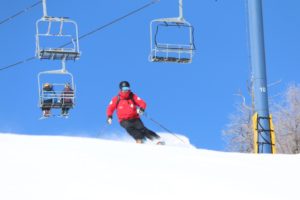 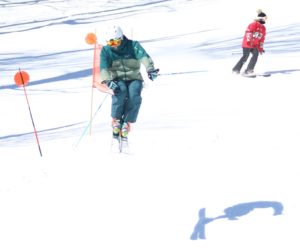 I’d be remiss to not mention the guy who launched past us (at least 30 feet off the top headwall) as we were catching our breath. By that point all I could do was laugh.

Late afternoon and I was toast. I dragged myself into the lodge and collapsed into a table by the window. A nice family sat with me. They were smiling. I was smiling. 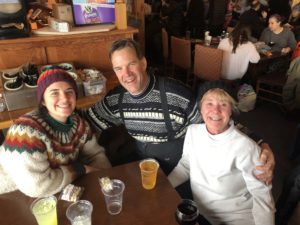 “Have you skied “Feefall?” I asked.