That Kind of Mountain

I was late getting to Platty this past Saturday, although I’d originally planned on getting there early. It was the NYSkiBlog 7th Annual Meeting complete with a screening of SNOWFARMERS that evening, and I had been looking forward to it all month. My yard that morning was rain-soaked and I was slightly skeptical there would be anything left to ski on by the time I got there.

But the experience of Plattekill is so much more than the conditions on the hill. No matter the weather, it’s always worth it.

The rain had begun to let up as soon as I arrived, and even with the strange, unusually spring-like weather, the lodge brought me right back to winter. Smiles on expectant faces, the warmth, and smell of a well-fed fireplace. As much as the skiing, this is why we come here. 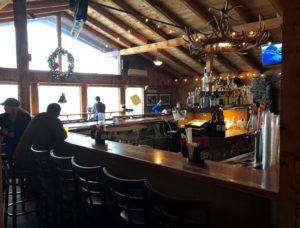 I met up with Platty regular (and one of the best skiers I’ve ever skied with) Rich Prado, slicing up some of his home-cooked venison and vigorously checking the forecast on his phone. The rain had started coming down a bit harder and he talked of a possible trip to Whistler, where they already have a 106-inch base and have received 20 feet this season.

Soon after, Pete Gordon and Brian Long joined up. The rain was slowing, so we hung out a bit more, sampled the delicious venison and waited. Eventually, the weather cleared, we booted up and headed out.

I don’t know if everyone was planning on a single obligatory run, or a handful, to justify the forthcoming libations, but it ended up being amazing, and none of us saw it coming.

Only the triple was running, and we first skied the Face on skiers left. The snow was soft, creamy. The fog hid anything beyond twenty or so yards forcing me to pay even closer attention to the terrain. Feeling the snow, and adjusting to sudden icy spots, or absorbing small rollers, without seeing them. Sound was amplified, and I could hear every turn of those skiing near me. 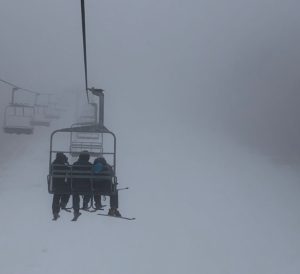 We stopped and converged midpoint at the intersection of Upper / Lower Face. All of us grinning. “That was awesome,” someone said, maybe me. And everyone nodded. We headed back to the chair. No one was leaving.

A handful of runs later we ran into Chris Stearns, Harvey Road, Roman Hrab, and Scott Ketchum. As the group grew, the skiing just got better. 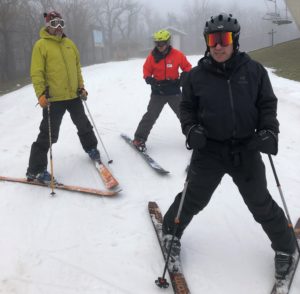 It’s a testament to Plattekill’s culture and the amazing people you meet there. It’s not just the conditions you are able to ski in, but who you are lucky enough to ski with.

At one point I lost count of the group, and we were breaking off, some hitting gates on Lower Face, and others the jumps and rollers on Shredded Mozzarella. (I witnessed Prado huck two sick shiftys). I was just happy to catch some small air my second day out this season.

I called it around 4 pm and headed back into the lodge, exhausted, euphoric. All the more so, as it was so unexpected. 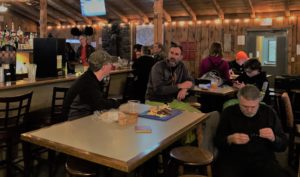 Afterward, the lodged buzzed. Everyone seemed equally surprised at how great a day they’d had. The tables and chairs had been pulled aside for the screening of the film SnowFarmers that was to begin within the next few hours. People had arrived with food and snacks; beer was poured and shared. And no one wanted to be anywhere else.

To think I’d almost missed it because of a little rain.

This morning I bought the Sunday New York Times. The Metropolitan section includes a great article profiling Plattekill. Powder Magazine a month prior – and now the New York Times.

Of course. It’s that kind of mountain.