I FOLLOW AN inordinate number of ski patrol Instagram feeds—there’s Jackson Hole and Snowbird and Alta, even perhaps most importantly Snowbird’s dog’s Instagram feed: @frankiebsnowdog—whose bio reads “I work and play @ Snowbird Ski Resort” and whose photos are crazy cute. I also follow the #skipatroldogs—also crazy cute. There are dogs in goggles, dogs in snow, dogs on patrollers’ shoulders at work, dogs on chairlifts, puppies on rescue sleds getting acquainted with the tools of the trade. Basically super adorbs. 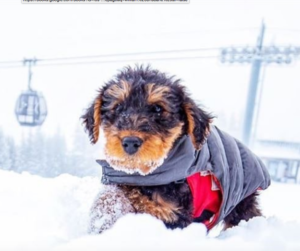 But, Platty has my favorite patroller Instagram feed (sadly no dogs, but that is because we have no avalanches—steep vert, yes, and more expert trails for our trail count than any other hill the Catskills)… And, I know I’m biased. I write the blog with Isaac after all. That said, every time I read @plattekillmtnskipatrol posts I am thrilled I ski here. Like: “No lift lines or crowds. Diverse terrain, sick steeps, woods, people know your name. It’s what skiing used to be and still is here. Just a different vibe at Plattekill, we kinda like it that way” as a video of patollers schuss down a newly groomed trail in early morning gleaming sunlight. The Instagram also makes me sad on the days I’m not skiing (which is about to be ten days beginning this coming week….).

And so, to Instagram, where Mike Taylor, the patroller who does the feed, captures Platty perfectly and with posts like:

Notice my triple hearts there… 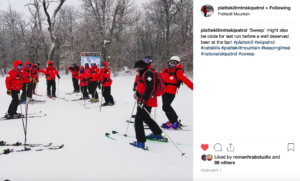 In person Mike is funny and self effacing (and sidelined with a knee injury is driving the shuttle, so be nice to him, buy him a beer and send him all the patrol pics you can). When I tracked him down and asked if he did the blog, he wouldn’t say, not at first. He thought he might have done something wrong. Not at all. It’s great, I told him. To which he responded with aw-shucks-humor and in self-effacing fashion.

All this is also a way to say Platty’s patrol is all-volunteer. They work at Platty because they love the hill. They are also nice, friendly and not the sort of patrollers out to bust rule breakers and give people a hard time. They spread the stoke. They also provide all their own equipment. This is all brings me to a trifecta of points not just about the Instagram (or that I’ll be reading it to get my fix while away) but that Saturday March 2 is the Ski Patrol Barbecue, the patrollers’ annual fundraiser that is crucial to their work. They have a raffle. The award-winning Brooks BBQ cooks up a storm (btw Brooks won a James Beard award which is like the food world’s Oscars).

So come support the patrollers, buy a ticket, buy a dinner, hang out for the fun. Think of me. I will be in a place where there are no mountains and no snow (which probably means we will get dumped on and I will be staring even more enviously at Mike’s posts). Another BTW, I’ve read that the ridges and fronts and rivers of El Nino are supposedly finally setting up to favor us come March. Those of you who remember, might remember last March 2nd where nearly 40 inches of snow fell in 8 hours and Platty was one of two mountains to be able to open in the Catskills…