This past Saturday began like most – I was running behind.

I always intend to be out the door, on the road with the dawn, ready to meet up with everyone in the lodge before first chair. Leisurely booting up with coffee and hellos, “how was your week? Were you here Friday?” “Been in the woods?”

Maybe sitting down to a foil-wrapped egg sandwich.

That sort of thing.

But no – no, I was utterly behind, and by the time I was able to extract myself from hearth and home it was nearly 10am (which might as well be noon when your plan is to ski). And my plan is always to ski, if at all possible.

So… late. And already dealing with traffic up the Kaaterskill Clove from those traveling to Hunter. All I could do was find a relaxing song and to try and keep a safe distance. No sense worrying now, might as well get comfortable… maybe a book on tape?

Then I received a text. (I have apple CarPlay, so it wasn’t that I read it, but rather heard it.)

Texted to me at exactly 9:43am. Had it not come from my friend Jennifer (who is NEVER late,) I would have thought it was a joke. But SHE wouldn’t JOKE about such matters. She just wouldn’t.

Glen Plake? The Mohawked SKI LEGEND I grew up idolizing? Watching EVERY film, having had nearly a dozen posters of adorning my room???? The guy who made me WANT to ski? Taught me the radness of neon, and hop turns in straight skis down a 45 degree pitch? 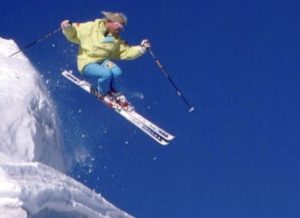 This was my punishment. The gods had spoken.

From atop their mountain, DECLARING – If the snow is this good, and you are fortunate to be within an hour of Plattekill and you STILL can’t get your butt on the road until nearly 10… THIS IS WHAT YOU GET.

And here I was, running late late, stuck in traffic, and ————- GLEN PLAKE was there. OF COURSE HE WAS.

Okay (I know what you’re thinking) ENOUGH with the whining, get on with it. 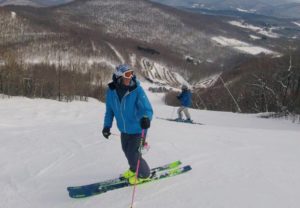 And there we were. The best part of which, was the smile on those who I see week after week. Those who may (or may not) have known we’d get the chance to hang out, let alone ski with the man. 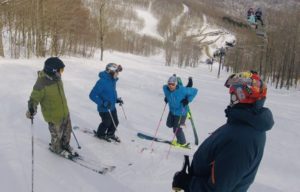 There is so much about this past weekend, it’s overwhelming. The what, where and why of the “Down Home Tour” Glen and his wife Kimberly started in 1991 is best captured in the October 2018 issue of Freeskier found here: https://freeskier.com/stories/glen-plake-down-home-tour.

It would be a disservice to simply replicate that excellent article.

What I can tell you is that (for me, and for many I think) his visit to Plattekill made me feel like a kid. As you can tell from the following video where I am following him in his bright blue jacket down plunge (and failing to keep up).

I can’t stop laughing. (And I share this with the full knowledge I am opening myself to ridicule.) But it was just SOOOOOO fun skiing behind the man, watching his fluidity and grace. Kimberly too, an exceptional skier in her own right; the both of them exuding such an infectious joy – it’s impossible NOT to laugh when you are around them. 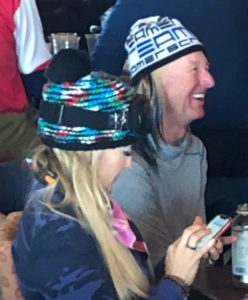 They are here to celebrate skiing and have fun – and they want you to have as much fun as they are. They kept saying “this place is amazing, what a great mountain, such great people…” A constant emphasis on how proud we should be of what we had. At one point, someone mentioned they’d been skiiing Platty for 40 some years, and Kimberly said: “Thank you.”

That struck me, and it still does. She and Glen care about these resorts. They want to see them endure, because they embody the soul of the sport. It’s a personal mission for them, and it’s why they make these unannounced visits.

Later that day I had the opportunity to ride the chair with him and we spoke about what makes places like Plattekiill so special – a place without a high-speed quad or overbuilt mountain-side condos. A place where all you need is a “fixed-grip double” and a crew of dedicated skiers and riders to show up every week and “smash it.”

That is where I first encountered him – at the top of the double, surrounded by just such a dedicated crew. Ready to show him their mountain, and also to follow him – this “Pied Piper of Stoke.” And – like him – to SMASH IT. 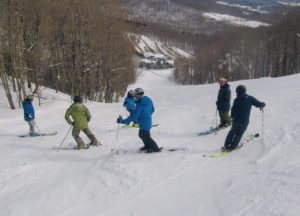 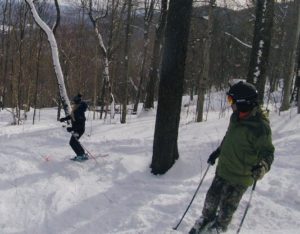 Kimberly & Rich – SMASHING it in the woods.

Plake is the epitome of what it means to “earn your turns,” someone who rock-climbs for first descents. Although he has access to the kind of terrain only sponsored pros have, while at Plattekill, he still found and climbed a rock face – searching a new route.

And this past weekend, they found a route to us. 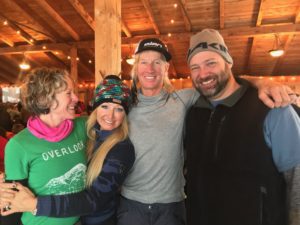 The tour continues and for those who will soon be visited, I envy you. I envy the surprise and the absolute blast you are going to have.