THIS IS NOT SO much a post but a small postscript to Isaac’s – and to Glen and Kimberly Plake’s visit. (BTW if you need more Plake action ala 1990, you can watch all of the Blizzard of Ahhhs here dubbed into Spanish). One of the things that was awesome about the visit wasn’t just how Plake turned middle-aged men into teenagers, but the kids and Plake. Here are pics of them (and some of those older teens aka adults) skiing with Plake. 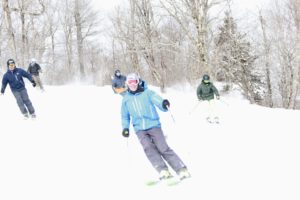 Plake Plus Part 2 by John McDaniel

In the lodge there was a really sweet moment when all the kids lined up to get posters: Tyler, Dylan, Gavin and Beck all waiting for their moments. When he got up to Plake, Dylan—who just turned 12, hauled out his phone. On the cover was a pic of Dylan catching air (pic of the air is here) and he had Plake sign it. Plake, with his flattened mohawk’s blue tips sticking out from his Elan ball cap, studied the image and nodded and said sagely, “Usually when we see an image like this, we look for this and that and the other thing.” [Note: I was a bit too far to hear exactly what these things were but was struck by the seriousness with which he was taking Dylan’s admittedly excellent skiing, though Dylan small and young]. Plake said, “But you, you’ve got it all going on. I really like this the way you’re so dynamic with your hands in the air.”

It was one of those electrifying heart-rending moments. I asked Dylan about it later and said, “I always wanted to be a pro skier but after talking to him, it was cool because he kind of made it real. Skiing with him showed me what future could be and doing it like a sport.”

Dylan also said of his skiing “He was super smooth like he was skiing groomers when doing moguls. It was all too good to be true. The adults were acting like children.” 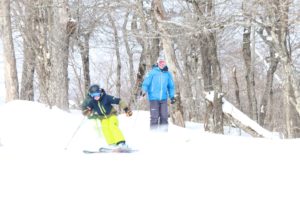 And the children, as witnessed in these pictures looked very cool. And kept their cool. 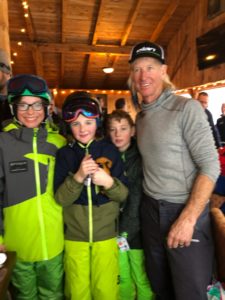