Pick Your Pleasure: Bike, Blades or Board

For most winter enthusiasts, the 2015-16 season will go down in the history books as the winter that wasn’t.  As far as good ol’ Mother Nature was concerned, completely uncooperative, according to Plattekill Mountain in Roxbury, NY.  However, needless to say, they have been fighting the good fight against odds to bring winter to the mountain for their guests this season.  According to Ken Davie, Operations Manager at the mountain “this winter we’ve put our snowmaking system to the test, running at its full potential, and making more snow than we have in the mountain’s history.”  Thank goodness for that as this allowed them to pile up the snow.  El Nino … Oh, El Nino.  Those who love the winter have come to loath the phrase El Nino.

For skiers and snowboarders, these snowmaking efforts have brought them a season at Plattekill… and that season is not over just yet.  The mountain plans to continue operations on expert-only terrain for the upcoming weekend, banking on huge, deep piles of snow the mountain made in anticipation of an early spring warm up.  At the same time though, their mountain bike enthusiasts have been “chomping at the bit” (so to speak) to ride their bikes with this great warm weather.

So, in an unprecedented move, the mountain has decided to literally blend the seasons together, and welcome skiers, snowboarders and mountain bikers to the mountain this weekend encouraging visitors to pick their pleasure on how they would like to enjoy the slopes — skiing, snowboarding or biking…or all of the above.  The $35 full-day spring ticket is good for all three, so the mountain welcomes guests to bring all their gear for the upcoming weekend. 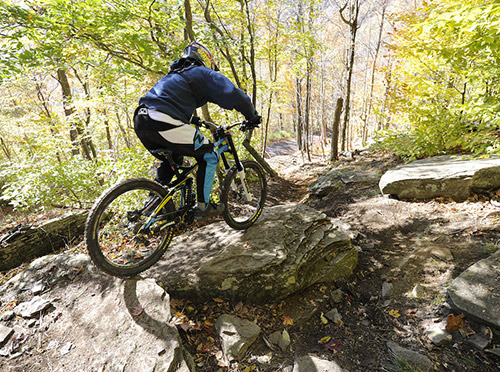 Since the snowpack is limited to the ski trails where there has been man-made snow, the Plattekill Bike Park crew has been able to begin trail clearing in an effort to kick off the bike season early this year.   This weekend’s soft-opening makes it the first mountain bike park on the East Coast to open lifts this early for biking.  “We’ve cleared several trails on our triple side of the mountain, in preparation for this split early season offering” says Laszlo Vajtay, GM of Plattekill Mountain, “we still have enough snow coverage on our Double Chair side of the mountain to let people ski and board and the Triple Chair will service the mountain biking enthusiasts, making everyone happy and bringing our winter and summertime guests together for one fun weekend.”

Weekend festivities also include a BBQ out on the deck (weather permitting), live music and plenty of local craft brews on tap.  Whether you’re a skier, snowboarder, mountain biker or just looking for an opportunity to head for the mountains, one thing is for certain, there will be fun times to be had at Plattekill Mountain this weekend.

Short of a major snowstorm, this weekend will be the last one for skiing this season and the mountain plans to officially open for mountain biking the first weekend of April.