February 29, 2020. This was the magic day, the extra day, the one that opened a hole into a parallel space and time, one where we walked through that door in the wardrobe and it was all on offer. It snowed. Whiteout snow. The only snow anywhere around. And, it was here. (I’ve been at Platty where it’s snowed 6 inches in a couple hours while all around, elsewhere in Roxbury: nothing, which is to say Platty is already a magic place that bends space and time). This was one of those days. LEAP DAY. 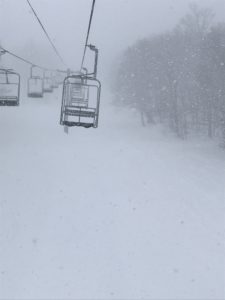 Then, there was sun. There was great snow on the trails. In fact, my morning began running into Laszlo and saying how insanely awful the season had been and yet how great the skiing. Because the snow has been amazing. The mountain has made a ton. And yet, it’s rained every week, and every week I say, “Oh, that’s the last week I’ll ski Freefall.” Which is indeed my favorite run – it’s got all natural snow and an amazing pitch. And yet in some Platty magic every weekend it’s still open and skiable. (I touch wood at writing this so as not to jinx it…).

Isaac, my co-blogger, and David, my husband, have decided that some kind of ley lines must run straight down Freefall as really I’d never ski anything else. Oh and that’s a picture of them both. Note smiles. Note sunshine. I’m about to make them ski Freefall. Again. 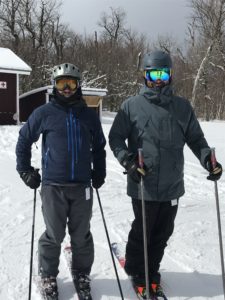 But back to the 29th. There were woods to ski and powder and some crud, and yes it had rained earlier in the week and the skiing was still great. And then after there was the bar. And after that my husband serenaded me with the theme song to Cheers as we walked to our car. The Platty Magic had happened.