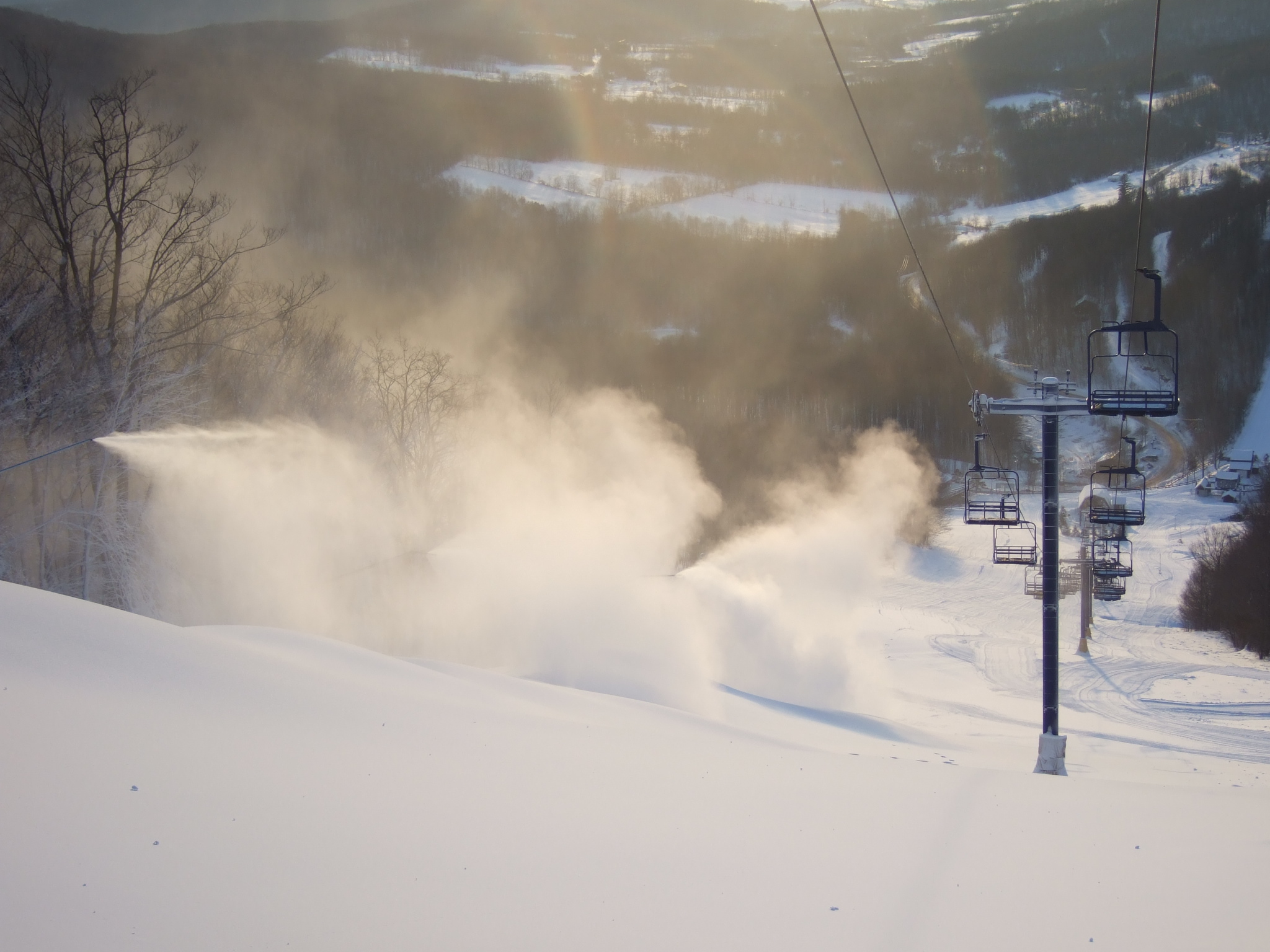 Guns and Hoses, Platty’s Snowmaking and Opening Top to Bottom

A voice rises from the dark. The scene is achingly beautiful. Snow falls, glistening. The voice is Macker’s – he who, with Plattekill’s owner Laszlo, keeps the mountain running and it snowing and that snow groomed. The voice in the dark says, this is his favorite time of day, before the sun rises, “First thing in the morning, first one here, making sure snowmaking works and the guys are here and the parking lot is plowed.” It’s the opening shot in Snowfarmers a documentary dedicated to Plattekill and to all the work that keeps the mountain going, to which we owe a huge debt of gratitude this weekend.

The mountain opens top to bottom Saturday morning, and it’s Laszlo and Danielle’s 25th season here. Platty is the last of the family-owned ski hills in the Catskills, one whose heritage and vibe keeps people coming back over and over. Snowfarmers captures the dedication it takes, or as Laz and Macker talk about the weather and its tribulations, as Macker says of the 2016 season, “This is the difference between eating steak or peanut butter and jelly for dinner.”

Stats in the film list just how stark things are: 15% of all ski areas have closed since 1990 due to corporatization of skiing and the prohibitive nature of snowmaking. That number seems small but as Vail and Alterra spread, moving West to Northeast and fewer and fewer small hills make it, Platty sticks out as it celebrates the soul of skiing. It was just featured too in Powder magazine which praised its terrain and culture as “Alta of the Catskills,” and stays true to its roots.

Snowmaking is dangerous and Macker outlines the hazards in the film: “A lot can go wrong, water is under 150-700 pounds of pressure; airlines 100-125 pounds of pressure, hoses can blow off and guys get hurt, the hose coming off at 100 miles an hour.” 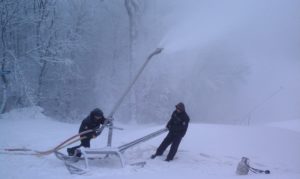 One year I went out with the snowmakers and watched them work with blowtorches and ice axes, and could see the multiple ways tragedy can befall a snowmaker: ice comes off fans at the speed of bullets; the hoses are under so much pressure, if they hit you, you die. Then there are more prosaic injuries, slipping and falling, hypothermia, the cold and dark…

Snowfarmers is beautiful, heroic and poetic and will make you love the dedication it takes to keep a ski area like Plattekill going. You can watch it here on Platty’s site (it’s 13 mins long and worth every second). The NYSkiblog is sponsoring a showing on Jan 5 with outtakes and interviews with the filmmakers. You can also find interviews with them here on TGR and NYSki blog. And most importantly ski and celebrate Laz and Macker and their work this weekend.

(Small side note, the first mention I found to “snow farming” was in the New York Times in 1973 as it mentions a half dozen ski areas in the Catskills—none of which still exist. Snowmaking itself owes itself to a Cold War technology GE developed, thanks to two dedicated skiers, one a Nobel Laureate, the other who hadn’t graduated from high school and to a third man Bernard Vonnegut, Kurt Vonnegut’s brother, who went on to work on Star Wars, working on blowing holes in clouds with lasers…).