THE DOUBLE chair opens Friday… (some hiked to Northface last weekend) but for those like me who are a tad lazy, this is your weekend. I still remember when I first skied Northface. I’d been skiing for maybe a year. I barely knew what I was doing. I pulled into the parking lot, and the attendant pointed at the hill as if it was the promised land: “It just opened yesterday. Macker has made it perfect.” 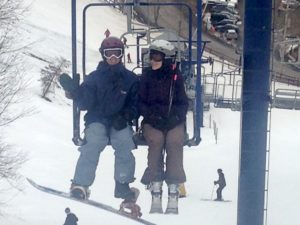 I had no idea who Macker was or what was in store. The person who was telling us where to park said, “And, I skied it over and over and over yesterday.”

That alone was an amazing moment, one that doesn’t happen just anywhere. I was sold.

And I have to admit once I got to the top of Northface, it terrified me. (After all I barely knew how to ski). But, the views were amazing, and now I love the run with its long sustained vertical, views across the Catskills, and the double feels like one of the reasons to ski Platty. It’s a fixed grip chair, one that says this is how skiing is done: with soul, with love—not about maximizing skier numbers or passes you can use anywhere, or corporate consolidation (that has even, now, hit the Catskills).

For those of you who want some old school soul, here’s a map of very, very old school Plattekill. The Plattekill Bowl it says. A T-bar ran up what is now Northface. 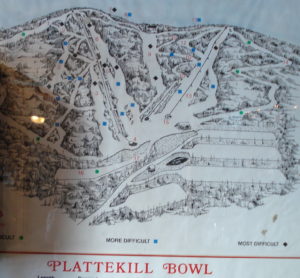 It did once twist around and was called Twist and Twist still exists, but now there’s more. And speaking of more. It is going to snow this weekend. Which translates to powder turns on Saturday and Sunday.