“Blood, Sweat and Tears.” And Guns.

This is the season, this is the quote. This is from Macker. He is the master of snowmaking at Platty. Now this could be a conversation that includes phrases like “wet-bulb temperature” (relating to humidity) and “inversion” (warmth in the upper atmosphere) both of which have taken a toll on snowmaking across the Northeast. Or, there’s the more commonly bandied “El Nino” (which sounds to me about like an armed bandit right now).

But, at Platty there is snow. A mountain of it. And, trails. And, the reason is not those big words but the heroes on the hill, working in the middle of the night. This is Macker’s team. Normally they’d start in the evening and leave in the morning whales of snow in their wake, but this year because of the inversion, because of the wet-bulb temperature, because of El Nino, they’ve been beginning at times like 2 AM to catch that window when the temperature drops to freezing.

To return to Macker here (BTW he’s a man who says “I am happiest when I’m making snow and pushing it around,” – also to note he’s a man of few words, and those are generally bitten down and he relishes riding alone in a groomer with no one else around – “watching waves of people walking into the parking lot skis on their shoulder.”) So he has been worried and says it was so warm it felt like November, and that perhaps the world needs a leap month, that is how crazy the weather has been. He also says, “You can make snow at 32 degrees. You just get less of it. It’s not that it’s too warm, but you get way less production.”

He thinks not just about Platty but every other hill. (He is also not one to pick and choose his words carefully even for the mountain blog—eg he is hones and in his honestly talks about everywhere is suffering). “For every ski area Christmas is a third of the season, a third of the income…” His voice trails off and he talks of  the impact on hills and employees and the snow. In Vermont Magic Mountain has only just opened this weekend, and Mad River Glen, whose die-hards are like Platty fanatics, did a video in December about “Skiing the Patch” (That is advertising skiing the 3 patches of snow on their hill). 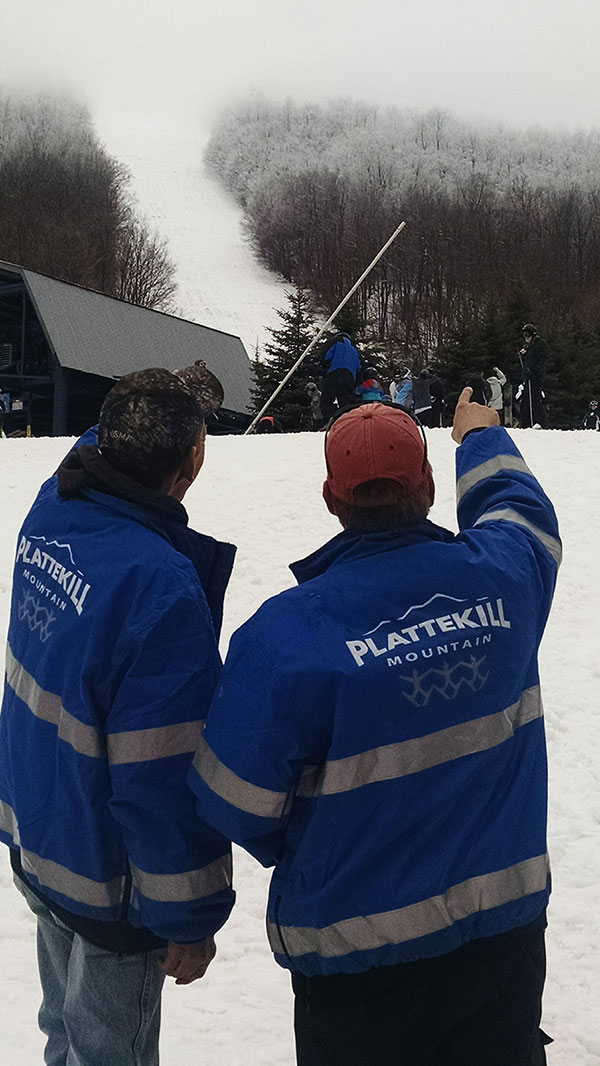 Laszlo, Platty’s owner, walks in the office, talk of that year and talks of one year that was worse. 1995. He was not even 30 and it was his second year of ownership. Macker came to help out and the New York Times came to pay a call. The season before had record snowfall. That year Platty was the only ski area not afraid to talk on the record.

It was January 19, nothing was opened in the East.  Back then, 21 years ago, the hill had 7 guns, and virtually no snowmaking.  But they got a headling in the TIMES:  “Ski Areas Suffer from an Endless Summer.”  Now Plattekill has a couple hundred guns plus the requisite blood, sweat and tears (and water pumped up of a less saline quality from ponds) to run them.  Instead of standing on a grassy hill, Macker and Laz are here in mountains of snow.  Thanks to a few heroes who are cheering on winter and giving it a helping hand.